I am really pleased to be able to interview James DiBenedetto today. This talented writer is now turning his dream series into audio books.


J.J. (James) DiBenedetto was born in Yonkers, New York. He attended Case Western Reserve University, where as his classmates can attest, he was a complete nerd. Very little has changed since then.
He currently lives in Arlington, Virginia with his beautiful wife and their cat (who has thoroughly trained them both). When he's not writing, James works in the direct marketing field, enjoys the opera, photography and the New York Giants, among other interests.
The "Dreams" series is James' first published work.

When did you start writing?


I’ve always liked to write, but really in high school was when I started to really make an effort.  I let it lapse in college, but afterwards, I began again.  I wrote the first draft of what would eventually become “Dream Student” back in 1998 or so, and then it sat for over a decade until I came back to it and rewrote it from the first page.
What’s the story behind your latest book?


“Dream Doctor” on audiobook is my newest release.  Our heroine is Sara, who’s just starting medical school, she’s just been married, and also, she can step into other people’s dreams.  Unfortunately for her, this causes a lot of problems, because some of the dreams she visits aren’t very nice.
Who are your favourite authors?


Mark Helprin, Stephen R. Donaldson, Alastair Reynolds, Julian May, for a start.
How do you approach cover design for your books?


I’ve been working with a local artist (she used to be the graphic designer for the company I work at).  I give her an initial sketch of what I envision it to look like, and she turns that into something people would actually want to look at.
How much research goes into your books, and how do you tackle that?


Quite a bit.  For “Dream Doctor”, I’ve never been to medical school or had anything to do with the medical field, other than going to the doctor when I’m sick.  So I needed to do a lot of research to make Sara’s life in med school believable.  My biggest resource was a memoir written by a woman who went to med school in the late 1980’s (just shortly before “Dream Doctor” is set) and describing her experiences and the process of changing from a “civilian” to a doctor.
Describe a favourite scene in your current novel?


My favourite scene in “Dream Doctor” is Sara’s jealous freakout, after she steps into her neighbor’s dream and sees that her neighbour is dreaming about seducing Sara’s husband.  She’s never really been jealous before (or had anything to be jealous about), and it’s a very funny scene.
What is the best comment you ever received from a reader? The worst or weirdest?


The best comment for “Dream Doctor” was from a reader who worked in the health care field – they asked me if I was a doctor!  So the medical scenes were definitely believable and realistic!
What else do you have in store for your readers?

I’m currently working on the sixth book in this series.  Sara’s going back for her ten-year college reunion, and she’s also got some baggage left over from the fifth book to deal with.
How did you come up with the hero and heroine for your latest book?


They came more or less fully formed, right along with the basic idea for the stories – what would happen if you could visit other people’s dreams?  Sara was always the person with that gift/curse, and Brian was pretty much always her boyfriend.
Do you plan several books ahead or do you work on one book at a time?


I usually just work on one book at a time, but it’s funny – as I started the book I’m working on now, I’ve been thinking about the one after that, and setting some things up for it.  I haven’t done that before.

What made you decide to turn your book into an audio book or were you approached by someone to make your book audio?

I hadn’t even thought about recording my books for audio, until my wife’s boss gave me the idea.  She’s close to legally blind, and she asked if the books were available on audio, and that got me thinking about it.
Was the process hard? Did you enjoy it?


It’s been easy, and I’ve enjoyed it tremendously.  I went through Amazon’s ACX (audiobook creation exchange) service, and they’ve made it about as simple as it could possibly be.
Did you have much say in who narrated your book and were you pleased with the results?

I had total say over it.  On the ACX service, you put your book up for potential narrators to audition for it, and you can also go out and search for one.  There are over 10,000 narrators on ACX, but you can narrow that down based on age, gender, accent, what genres and styles they will narrate, etc.  I ended up with 20 or so that fit all my criteria, and after I listened to all of them, I had five that I really liked.  One of those five responded back, because she had “a gut feeling” about my books.
I’ve been 100% thrilled with Heather (my narrator, Heather Jane Hogan)’s work.  It’s better than I could possibly have hoped.
How has the finished product been received by readers?
All the feedback I’ve gotten so far has been positive; they love Heather’s take on the books and the way she brings the characters to life.
Will you be making all your books available in audio?


That’s my plan.  The first two books are finished and for sale, and the third is in production now.  I think/hope Heather will do the fourth book in my Dream Series, and I’ve finished a fifth book as well.  I’m hopeful I can talk her into doing that one, too.
Please share any experience you had that you would like to share while you and your book were going through this process.


The first time I heard Heather narrating from the first chapter of my first book, I was just blown away.  And it was thrilling to hear my work brought to life.  It’s the next best thing to seeing them filmed as movies. 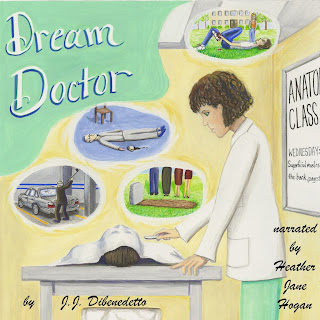 “I didn’t expect to be woken up by someone I don’t know dreaming about killing somebody. I thought I was done with that once and for all…”


But Sara’s not done with it. As if adjusting to life as a newlywed and starting medical school weren’t difficult enough, she’s started seeing the dreams of everyone around her, again. Before everything is said and done, those dreams might destroy Sara’s hopes of becoming a doctor, wreck her marriage and even end her life…


“Dream Doctor” is the thrilling second novel in the Dreams series.