I am really honoured to introduce this author and her book on my blog. She is one amazing lady who has the most difficult story to tell. It is hard to believe that this story is totally true. Lori is an inspiration to us all.

It involves a lot of facets of my life, e.g. childhood sexual abuse, lifelong struggle with substance abuse, domestic violence, living with bipolar and now PTSD.  But the focus of the story is moving to Iran with my Iranian husband (who turned out to be a terrorist), and then being put into a POW type camp the day after 911; where I was raped, tortured and starved x6wks.  I eventually escaped and went on to better my life which shows people there is good/great in everything we do if we can show people that we CAN TURN OUR LIVES AROUND.

What is the greatest joy of writing for you? 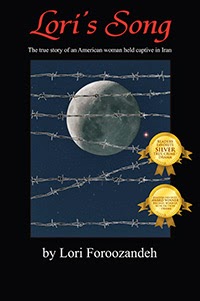 The news that all those rumors were horribly true came on September 11th 2001. That was when her husband suddenly announced that they had to go back to the
States in case there were repercussions.

On September 12, 2001, Lori and her husband were at the Shiraz bus terminal intending to catch a bus to Istanbul and from there to Heathrow and home to the
U.S.A. They were totally unprepared for the convoy of troop carriers that suddenly drove up and the armed men who came pouring out to take the hapless couple
prisoner.

There was no explanation offered. The men took Lori's husband one direction and she another, pushing them blindfolded into the back of the troop carriers with
other prisoners, mostly Iranian.

Who the armed men were was anybody's guess but they took their prisoners to POW camp in unfamiliar territory and there, Lori was held, tortured, raped, and
starved with them for over a month. Her husband was not to be seen again.

Lori was rescued with one of her fellow inmates by the girl's family and, after riding a llama for 1-2 days over mountainous terrain; she arrived at the Iran Immigration
center. By then, she weighed in at only 70 pounds, was still suffering from the many injuries she'd received at the hands of her torturers, and wanted badly to get
home to her family in the USA. Even then, she had to fight Iranian Islamic bureaucracy to have permission to go, as the husband was unavailable to grant it. In any
Islamic country, unknown to many western women, the husband or guardian's permission is always required for a woman to travel anywhere.

Lori had been married to Mohammad for 9 years and thought she could trust him but, since their arrival in Iran in 1998, his personality and behavior had changed so
radically as to make this most recent nightmare highly suspicious.

The events told here are true. It was no coincidence that this American citizen had been placed into a concentration camp. In fact, it raises many questions and
should be a caution to many!