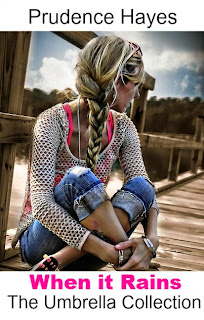 When it Rains: The Umbrella Collection


Blurb ~ With rain chasing her at her heels and her fear of rain flowing through her veins, Nora is in a downward spiral mentally and trying to grasp onto anything that will stop her. For many years she has been trying to come to grips with her parent’s death in a car crash and a voice that she incessantly hears in her head that announces only evil.

She lives amongst a testosterone filled family; Pops, her uncles and cousins that have never wavered in their love but are often overshadowed by the darkness that overwhelms her.

With the loss of a friendship, running into the man that killed her parents, and her family confronting her about her issues, all with the sound of the voice echoing throughout, she is brought to the edge of insanity and to her breaking point. Will she win the battle in her mind or will she succumb to defeat? 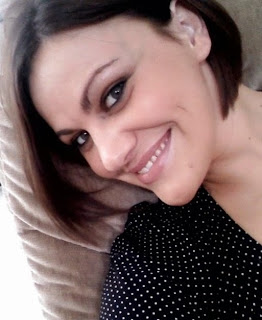 Bio ~ I have always been swept away in some story that was floating around and evolving in my mind, but, besides for a few times, hesitated putting them down on paper due to the fact that I was worried what others thought. Those stories and screenplays that were written down when I was younger were secretly hidden from everyone’s eyes. After 30 years, I convinced myself that the opinions of others no longer mattered and it was all about how I felt writing. The creative process can be my nemesis at times, but when it feels right, it is the love of my life.

I am the author of WHEN IT RAINS: THE UMBRELLA COLLECTION and BACK INTO THE SUNSHINE.  I currently live in Philadelphia, PA, but who knows where I'll be this time next year.

A few moments went by and the scene that I was picturing in my head became a reality. However, as he walked by me and our eyes met, his head just nodded and he kept on walking. His scent that was engrossed in cigarette smoke lingered in my area infiltrating my senses and I picked up a slight odor of alcohol, too. There was no acknowledgment of who I am. No wonderment strewn across his face about whether or not I was the little girl crying her eyes out in the back of the courtroom as his verdict was read.  No apology just a nod in acknowledgement that a person was standing in his walking path.
He walked to the same aisle that I saw him in before.  He grabbed a bag of rippled potato chips, then turned his attention to the refrigerator behind him, reached in and grabbed a six pack of the cheapest beer there was. He was done picking up his supplies and headed towards the cashier, but he had to pass me one last time. He noticed that I was still in the same place and watching his every move, so this time he added a smirk across his mouth along with his nod and preceded to the check out.
I was stunned and completely grossed out that he looked at me like that. I stood wondering what I should do. Thoughts of a confrontation ran through my mind and immediately were pushed out and the only thing I could bring myself to do was to leave. I stormed out of the store and onto the sidewalk outside, desperately trying to rid myself of the hate that was flowing through my veins. I hated him, of course, for what he had done and that it seems like he has gone on with his life and repeating the same mistakes. I hated myself, too. I didn’t do anything. I couldn’t bring myself to utter a word to him or to even hit him with a bag of potato chips. That was my chance and I let it float by without a fight. I walked around in circles outside the front door of the store and still in disbelief.  I  was about to take a step and begin my walk back home when something stopped me in my tracks, something I had seen on only one other car. It was a “Honk if you love Pussycats” bumper sticker. Thoughts of the courtroom riddled my mind; how the prosecutor repeated that phrase over and over again and pictures of the crushed up cars.  One was a close-up shot of that bumper sticker with a hue of canary yellow as a border.
“This has to be his car.” I thought to myself.  Then my instincts kicked in and before I knew it I had bent down and my fingers were wrapped around a rock that was simply lying there as decoration inside of a planter’s box that was around a small tree. I took aim of the car, drew back my arm and launched the rock into the back windshield. Smash!

Posted by Danielle Rose-West at 05:38